Pradhan Mantri Make In India Pdf | Government Schemes | Features | Objectives – The Indian economy is growing optimistically with strong growth in the country and an improvement in the overall trade outlook and investment signals. With the help of the new efforts and initiatives of the government, the construction sector has improved considerably. The Prime Minister, Shri Narendra Modi, on September 25, 2014 launched the ‘Make in India’ programme to transform India into a global hub of critical investment and construction, structure and innovative experiments.

‘Make in India’ mainly focuses on the manufacturing sector, but it also aims to promote entrepreneurship in the country. The approach is to create a conducive investment environment, modern and efficient infrastructure, open up new areas for foreign investment and build a partnership between government and industry.

The ‘Make in India’ initiative has received positive response from across the country and abroad. Since the launch of the campaign by Invest India’s Investor Facilitation Cell, more than 12,000 queries have been received on its website. Countries like Japan, China, France and South Korea have shown their support for investment in India in various industrial and infrastructure projects. The following twenty-two sectors under the ‘Make in India’ initiative: 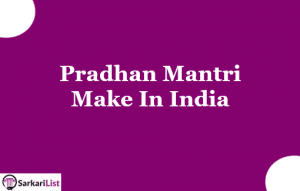 Objectives of Make in India

The Make in India mission has several goals. They are:

Several major schemes have been launched by the Government of India from time to time to support the Make in India campaign. This includes:

Make in India 2.0 focuses on 27 regions with special focus on ten champion areas;

The challenges facing the campaign ‘Make in India’ are: