List of Prime Ministers of Norway 2022 – Who Was First PM Of Norway – Norway has a constitution, which was adopted on May 17, 1814. The position of the Prime Minister is the result of law. Modern Prime Ministers have some statutory powers, but provided they can order the support of their parliamentary party, they can control both the legislature and the executive (cabinet) and therefore exercise considerable real powers. As of 2021, The Prime Minister of Norway is the Labour Party’s Jonas Gahar store, replacing Erna Solberg of the Conservative Party, who resigned in October 2021.

Unlike their counterparts in the rest of Europe, Norway’s prime ministers do not have the option to advise the king to dissolve the storting and call a snap election. The Constitution requires that the storting complete its entire four-year term. If the Prime Minister loses the trust of Storting, he should resign. 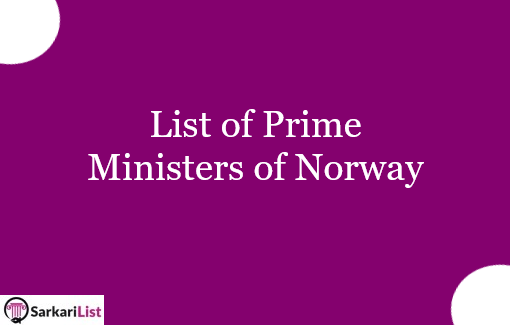