List of Presidents of Georgia 2022 | Complete List Of Georgia Presidents – Georgia is located in the Caucasus region south of Russia, which sits on the interchange between Europe and Asia. During the Red Army invasion of Georgia (1921), the Soviet Union took control of the country and a year later Georgia was part of the Transcaucasian Socialist Federative Soviet Republic (TSFSR) until 1936. That year the TSFSR was dissolved and Georgia became the Georgian Soviet. Socialist Republic until 1991 when the country gained independence from the Soviet Union. In May of the same year, Zwiad Gamskhurdiya (1939-93) was elected as the country’s first president. Soon after the election of Gamskhurdiya, the country suffered a coup and the resulting Georgian Civil War (1991–93). The country eventually stabilized in 1995 with the election of a new president and the passage of the country’s constitution. 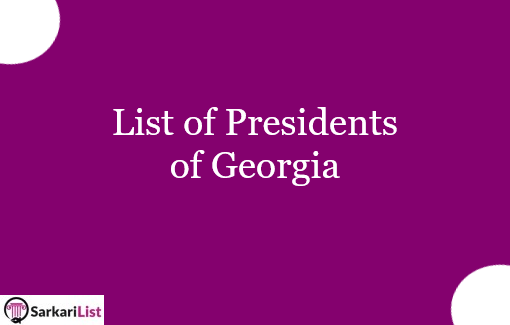